skip to main | skip to sidebar

So far the running total...

When I have made enquiries they have gone to great lengths to state that these savings are both 'cashable' and 'non-cashable'. I assume that a 'cashable' saving is simply a hard cash saving whereas a 'non-cashable' is a saving that can be identified and evidenced but would show a saving kind of thing! Confused...? Anyway I have formally asked for an explanation of 'non-cashable'. As soon as I receive the answer I will publish my findings!

Posted by Save Our Public Services at 20:54:00 No comments: Links to this post

In response to my request for information, regarding 'efficiency savings' from 2004 to 2008 within NYCC I received an enormous amount of data from NYCC. So that I publish only accurate information I had to double check the information. Under a 'supplementary question' I asked the
Assistant Director - Projects from NYCC the following enquiry:

Could you confirm that the following savings have been made in NYCC from 04/05 to 07/08?

The reply I received from the Assistant Director was:


The figures you quote are those we returned at the time of the various Gershon returns to Government, and include both cashable and non cashable savings
In practice the Government has "repriced" previous years returns using it's GDP deflator for it's own statistical purposes.
The 2007/08 return I included in the original response shows the official repriced "running total" for the whole period.
This gives an overall figure of £31.573m to the end of 2007/08, of which £16.945m is cashable

That is a lot of money!
Posted by Save Our Public Services at 20:32:00 No comments: Links to this post

Further 'Efficiency Savings' within North Yorkshire...that have been made on our behalf!

Once you start digging it seems everyone is at it! I just cannot believe the scale of these so-called 'efficiency savings' that are being made within North Yorkshire. There seems to be an also evangelical zeal to make these efficiency savings at our expense!

So far we have established that the Police have 'saved' through 'efficiency savings a total of £21.972m between 2004 and 2008. As stated previously all this information has been obtained under the Freedom Of Information Act 2000.

I have just received an answer from Hambleton District Council regarding 'efficiency savings' over this same period. Bearing in mind that HDC is one of seven District Councils within North Yorkshire and they have made the following savings:

Please bear in mind this is money that could have been spent on us as taxpayers!

I have requested similar information from North Yorkshire County Council. In all fairness NYCC replied with so much information I had to ask Supplementary Questions to clarify the exact figures...I certainly don't want to be accused of giving incorrect information! So I will publish that information once I get it.
As for North Yorkshire Fire and Rescue Service they never reply until the statutory 20 working days has elapsed...as allowed under the Freedom Of Information Act 2000...I don't think it is personal.

Anyway we are talking about a lot of taxpayers money NOT being used for public services and amenities within North Yorkshire.

So what have our local politicians been doing whilst they have voted through these 'savings'? The trouble is that no-one is saying 'NO'! Please let me know if anybody is saying...'No'! You never know there may be others out there who will come forward and who will stand up and be counted.

Just wait until we start exploring the need and rationale of introducing car parking charges within the HDC area!

The mind boggles!
Posted by Save Our Public Services at 16:45:00 No comments: Links to this post 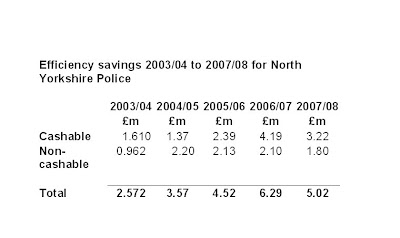 If the North Yorkshire Police are making savings of £5.02 million why are we paying so much in Council Tax? Why aren't these 'savings' being passed onto the ratepayer?

It would finance166 extra Police Officers on £30,000pa for the taxpayer of North Yorkshire.

It would buy 1255 speed laser guns at £4000 each for the taxpayer of North Yorkshire.

It would purchase 4183 portable speed matrix signs at £1200 each for the taxpayers of North Yorkshire.

This debate is definitely set to continue!
Posted by Save Our Public Services at 12:00:00 No comments: Links to this post

Funding for the Police Speed Laser Gun in Bedale

An Elected Mayor for North Yorkshire...smothered at birth?

Let's get straight down to business.

Under the banner of Saving Our Public Services in ...this topic is crucial.

Strong, accountable and democratic Leadership is essential to save and preserve local public services and amenities. These are services that we pay for. By public services I mean local Education services, Police, Fire, Bin Collections, Street Cleaning...all services we pay our local rates and taxes for. So where better to start, than with who leads those that run and administer them?

The post of an elected Mayor is up for consultation and discussion in . Let's talk about it and fully explore these interesting proposals...it is very obvious that the local political establishment doesn't want to engage in any meaningful debate and discussion over this important subject.

Hidden away in a locally distributed council magazine was a small and discrete article about a change in the legislation regarding the Leadership of North Yorkshire County Council. There seem to be two proposals on the table:

I read the article and decided to find out more about these 'consultations'. I went on the NYCC website and found this information...please follow this link for more information:

Things can only get worse! Is this more of the same...but worse?

The NYCC literature and website kept stating that the...'The County Council considers that the leader and cabinet executive model is best suited to the circumstances of .'

Why and how have they come to this conclusion?

Why do they think it would be best suited?

There was no explanation as to why the former model was 'best suited'. It always concerns me when the consultation process kicks off with phrases like this.

This issue was placed on the Agenda for the Bedale Town Council Meeting which was held on Monday 8th September. These are a few of the issues that were raised at the meeting:

Could I draw your attention to an article in the and Stockton Times written by Andy Walker who attended the Town Council Meeting?

A couple of questions that should be put to the current Leader of the County Council:

There are many unanswered questions!

My main concern is that this whole issue will probably be smothered at birth by blatant self interest and fear of change regardless of the will of the people of North Yorkshire.

Is this simply empire building at the expense of the ratepayer?

Do local politicians really have your interests at heart?